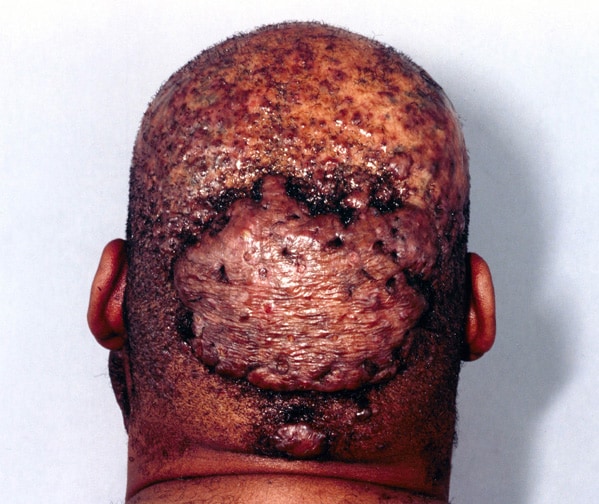 pustules, which eventuates in keloidlike lesions. The lesions are most pronounced on the occipital scalp and the posterior part of the neck, and they occur almost exclusively in young males of African descent.1 The term acne keloidalis nuchae is somewhat of a misnomer because the lesions do not occur as a result of acne vulgaris and are histologically not keloidal.

Acne keloidalis nuchae was first recognized as a discrete entity in the late 1800s. Hebra was the first to describe and document this condition in 1860, under the name sycosis framboesiformis. Subsequently in 1869, Kaposi described this same condition as dermatitis papillaris capillitii. The term acne keloidalis was then given to this condition in 1872 by Bazin, and, since that time, this is the name most often used in the literature.

Clinically, the lesions initially manifest as mildly pruritic follicular-based papules and pustules on the nape of the neck. Because the folliculitis is persistent, ultimately keloidlike plaques eventuate. The area is typically hairless, but broken hair shafts, tufted hairs, and ingrown hairs can sometimes be identified within and at the margins of the plaques. Over time, the plaques typically slowly expand. The lesions are disfiguring and can be painful. Abscesses and sinus tracts with purulent discharge may develop in advanced cases. Comedones are not a common feature of acne keloidalis nuchae.

Below are before and after photos of patient showing the initial state of his AKN lesion and the back of his head following his excision surgery.

Dr. U discusses this patient’s case in the video and also presents additional before and after images.